The Benefits of Creeping and Crawling

Wow, if there are two movements that I love, it has to be creeping and crawling. The benefits from these movement are extremely important to us, but more about that soon,  first I want to outline the differences between creeping and crawling, becuase if you are like me you may not know the difference,  these movements are often seen as the same yet are very different.

Without being too technical crawling is the way spiderman moves, or a soldier on his belly in the dirt with barbed wire and shots being fired overhead! (you get the idea) 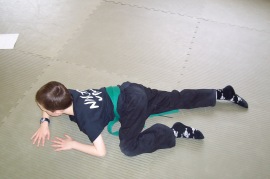 Creeping (seen below) is when the infant is on hands and knees with belly well away from the floor.

With respect to our early development, it is essential that we crawl and then creep, if we don’t, or didn’t, we miss out on some of the awesome effects that these movements have on the developing human. Now you may be thinking what prevents us from creeping and crawling as part of our early development, a difficult birth is a major factor, with early trauma to a child’s delicate cranium causing imbalances that put strain on the nervous system another factor is encouraging infants to walk too soon and the use of baby walkers. More about this on a future blog 🙂

When I first started teaching children to creep and crawl, I was amazed at how many children could not do these basic movements naturally (particularly crawling). The second thing I observed was that in many cases these children were also the ones with special needs.

So I wondered, if the children could relearn the missed skill of crawling then creeping, would their special needs change? and what other benefits were there beyond what we already know movement can achieve as a form of exercise?

If we crawl along the floor ourselves, we soon begin to realise the benefits to our core muscles in this movement, but also as we continue and probably break a sweat (I know I do) we feel this is a whole body exercise.

So the young infant is strengthening their whole system when they crawl, with movement allowing a wider exploration of their environment, the right and left brain is wiring more circuits through the corpus collosum. The foundations for higher development are being frimly laid.

As the child moves up onto their hands and knees, they are now in a creeping position and will realise some new benefits, their proprioception is getting a new education with different movements and tensions being spread throughout the child’s Tensegrous tissue structure 🙂 tongue twister

Proprioception is the sensory feedback system that feeds back information to the central nervous system. Sensory receptors known as proprioceptors are located in muscles, tendons and joints.

The new movements in the childs body positions will result in a foundation for walking writing and spacial awareness, bones will begin to strengthen and change as the forces imposed upon them affect the trabeculae, this process is known as wolffs’ law. The benefits are many and we hoped to enhance children from these movements.

Of course we didnt stop there, we kept taking the children to the next level of creeping and crawling with games and a lot of imagination to really switch them on.

The classes were designed so that children could be taught the movement patterns they needed the most in a fun way, because not all children require the same movement patterns, and for some children certain co-ordinated exercise can be stressful, with the right approach  it wasn’t long before parents were starting to report back to us noticeable improvements in their children’s development, so we cracked on as they say in Yorkshire!

We all know how important movement is for a healthy body and mind, movement helps us relax, keep’s us fit and is key to living a happy life.

In my experience working with children, it became very clear that many children who had limited movement capabilities also struggled in other areas of their life.

Sometimes a child lacked concentration in group activities to more severe disruptive behaviours, but it didn’t stop there, parents and teachers would often notice a wide range of disorders

in a child’s development, these would often include balance difficulty, reading and writing ability, low energy or hyperactivity.

The interesting fact is that when the movement of children was improved through practise either in focused one to one sessions or in-group activities, improvements were seen in the child’s broader developmental issues.

With 25 years experience in Martial Arts and Complementary health, I have created a class that integrates natural movement with a therapeutic approach.

The principles used in the classes come from the teachings of Dr. Masaaki Hatsumi, who is the head of a martial and medical tradition that dates back two thousand years. The essence of everything that I do is based around Taijutsu, which translates from Japanese as “ Natural Body Movement.”